Best Bees was kind enough to do a DNA analysis of my spring honey.  When I first got the results back I was really confused.  How could most of the honey come from Red Buds?  There are a few in local parks but this is not a common tree in NYC.  Learning about mushrooms has helped me understand the results a little better.  Ceasalpinioideae is subfamily of Fabaceae or Leguminosae which is also known as the pea, bean and legume family.  Honey locust and I would guess Black locusts are part of the Ceasalpinioideas subfamily.  These trees produce and bean pod type seed.  They say that they found the pollen was Cercis which is from types of Red Buds.  I question this and when I asked about it they told me that the honey could not be traced directly to Red Buds but rather the Cesalpinioideae subfamily. It is much more likely that the honey comes from a larger group of plants, a group that might include Locusts. The other percentage break downs of the honey are more straight forward because they are narrowed down to Genus which is a subcategory of a Family.  When we identify plants using Latin we say the Genus first and then the Species.  Acer refers to Maple but there are many types of Maples. For example Norwegian Maple, Acer platanoides. I was terrible at Science growing up but I am now very interested plant identification. 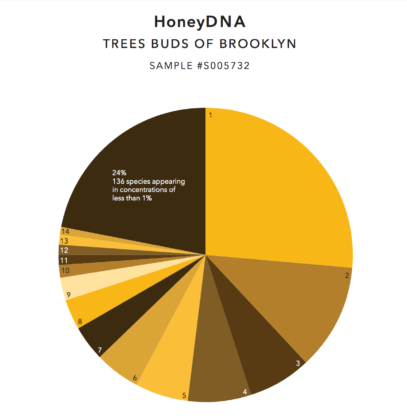 Your hive’s honey analysis revealed that the highest percentage of pollen is received from the subfamily of plants Caesalpinioideae. We were able to further identify this pollen as Cercis pollen. Cercis is a genus of about 10 species in the subfamily Caesalpinioideae of the pea family Fabaceae, native to warm temperate regions. It contains small deciduous trees or large shrubs commonly known as redbuds. It is likely this pollen originated specifically from Cercis Canadensis, commonly known as the Eastern Redbud. The Eastern Redbud blooms vibrant pink blossoms in spring and can be found in many local gardens and parks, where it stands out among the fresh green buds of surrounding trees. The early spring into summer bloom of the tree provides a dependable source of both nectar and pollen at an important time when bees are rapidly expanding their colonies and need all of the food they can gather to feed the brood.

The second highest percentage of pollen in your sample came from the Tilia genus of plants. Tilia Americana, commonly known as a Linden, is a tall, grand-looking tree native to New England. They’re a popular choice for lining city sidewalks throughout northern America, and your honeybees are likely taking advantage of the nearby Linden trees in your neighborhood. When the tree blooms early to mid-summer, it produces clusters of sweet white flowers that honeybees will flock to for their high sugar concentration. These fragrant blossoms offer foragers the nectar and pollen they need in their varied diet. Bees may also take advantage of the honeydew on the Linden tree’s leaves, which adds an extra sweet touch to your honey. Unlike floral honeys, which derive from the nectar of flowering plants, honeydew honey is obtained by secretions of the living parts of plants or excretions onto them produced by sap-sucking insects.

The third highest concentration of pollen found in your right hive’s honey sample came from Maple trees, belonging to the genus Acer. Some common species are the Sugar Maple, Black or Red Maple, Norway Maple, or Box Elder. Red Maples are the most common in your area, and flower in the spring, providing both nectar and pollen for bees. Maple trees are also a potential source of sap, which helps your bees to generate propolis. Propolis is red or brown multi-purpose resinous substance that honeybees produce by adding saliva, beeswax, and exudate to the tree resins and saps. Bees use propolis to reinforce the structural stability of the hive, reduce vibration, make the hive more defensible by sealing alternative entrances, prevent diseases and parasites from entering the hive, and inhibit fungal and bacterial growth. Maloideae, a specific subfamily within the flowering plant family Rosaceae, are also a source of pollen for your bees. We commonly refer to members of this subfamily as apple trees. Apple trees blossom in spring and are an excellent source of pollen and nectar for your bees.

We identified the fifth most common pollen in your honey sample as from the Trifolium genus, likely White Clover or Alsike Clover. Clover is a well-known native source of nectar and pollen for honeybees. It starts to bloom in late spring and throughout the summer. If clover is present on your lawn or neighboring green spaces, it is best to wait a few days after it blooms before cutting it so the bees might reap the benefits of the nectar-laden blossoms.

We found the genus Ligustrum to be the sixth most abundant pollen in your honey. This flowering shrub is commonly known as privet. It is not native to the region but is very popular amongst gardeners and landscapers, and it is a great choice, since privet provides both nectar and pollen for your honeybees from its small white flowers. Sometimes used in traditional herbal medicines and teas, privet blooms in late spring and throughout the summer. Your honey is truly unique, sourced primarily from Redbud and Linden. These species provide your bees with the nutrition they need to thrive. Identifying and recording the pollen concentrations of your honey will help us to reinforce and redefine the nutritional needs and preferences of honeybees. Your sample gives us a small snapshot of bee nutrition in your location – as we analyze more samples we’ll eventually have a complete picture of a healthy bee’s diet. Thank you for being among the first to take part in this exciting and revolutionary project!