I brought a 10 frame queen right medium to one of my school garden to boost and requeen a hive that had been struggling with European Foul Brood all season. I broke down about two weeks ago and gave them antibiotic and started feeding heavy. Well, I guess they thought it was spring because when I went to look for the queen they were full of swarm cells 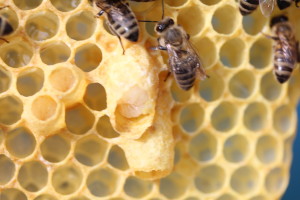 I went to work taking out the cells. I would have been excited if it were spring and I would have made splits. I fear letting them requeen now would mean the end of this hive.  It’s too late for them to have such a long brood break.  They would not be able to build up for winter.  Plus I had a good queen right there. I guess feeding them made them think it was spring. Hard to believe they wanted to swarm with hardly three medium boxes drawn out and the bottom box mostly empty.

I made a nuc with at frame with four cells on it. There was probably 15 total from my poor little sickly hive! I had to check twice and I am glad I did because I would have missed some. In the middle of all this I did a sugar roll. Zero mites on about 2+cups of bees.

I reduced them to two boxes and put the queen right medium on top with a newspaper combine, feeder on top of that. I looked for the queen but could not find her. I could not find eggs or young larvae. The larvae appeared to be at least a week old. I put queen excluders between every box 4 days ago to help with finding her.

I guess it’s not uncommon for some hive to get in a cycle of not building up and then swarming.  It was shocking for me.  Just when you think you have an handle on your bees they through you a curve ball.  Luckily, I have a beautiful new queen for them. 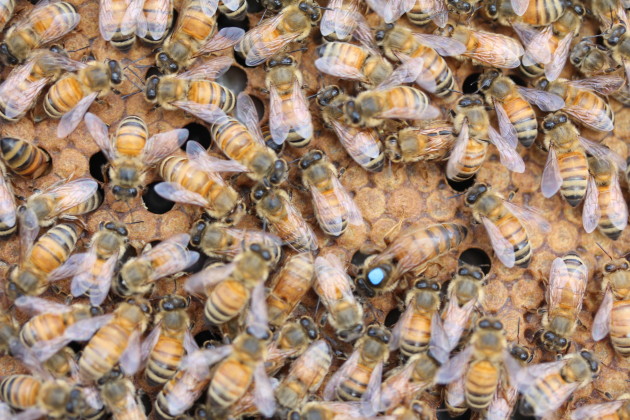 5/1/15  Currently I have four hives in Bed-Stuy and two mentor hives in Brownsville Brooklyn.  I have been experimenting with locally mated queens.  Last year I wanted to expand and I went from two hives to seven.  I gave one away, now I have six.  This year it is quite the opposite.  I want to avoid swarming and maintain my numbers.  I hope to have a good honey harvest. 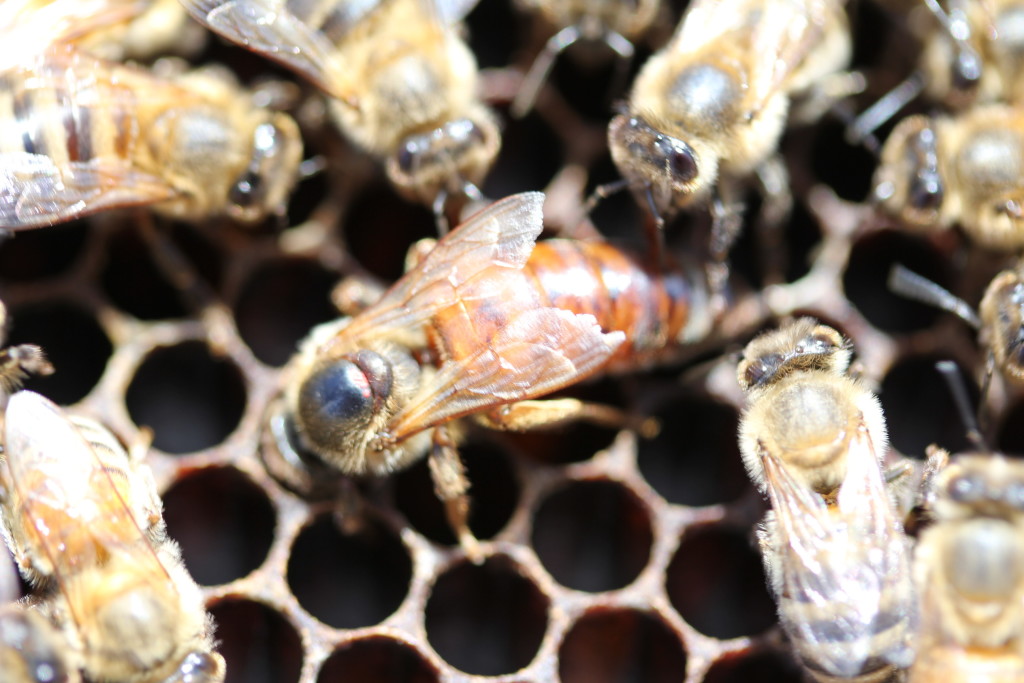 This is the mother of all my hives except one.  She is a Carniolan queen.  She is in that act of laying and egg in this picture.  This is her third season and I am worried she might swarm.  Swarming is one way that the bees get rid of an old queen and start fresh.  I am planning to Demaree the hive to keep them in the box during the flow. 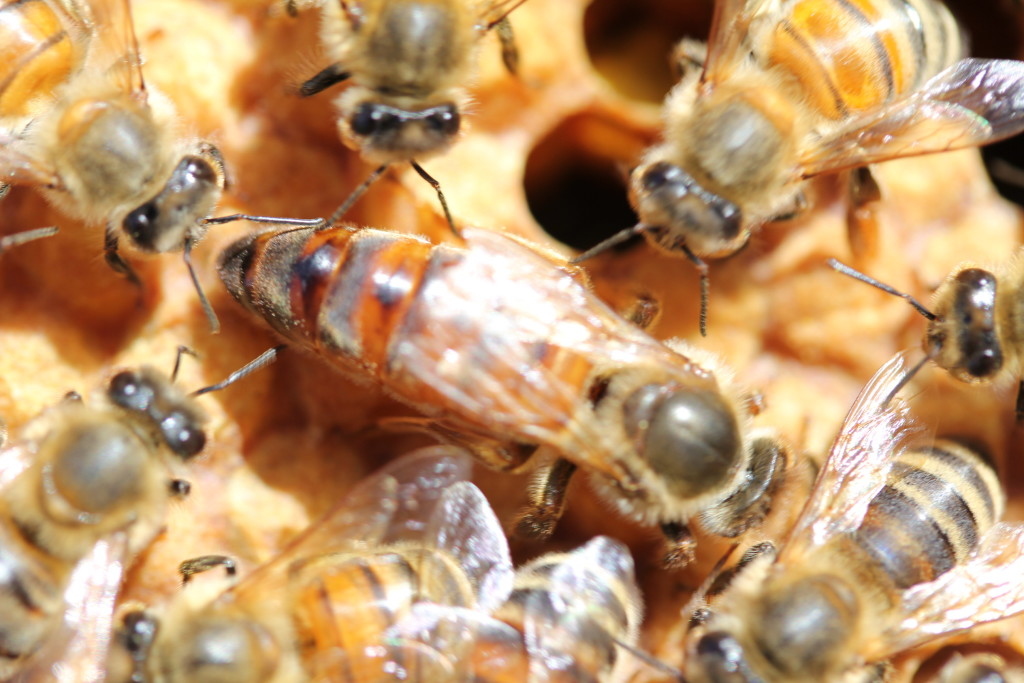 This is her daughter.  She is my second experiment with local mating.  She is doing well but her sister is the real power house. 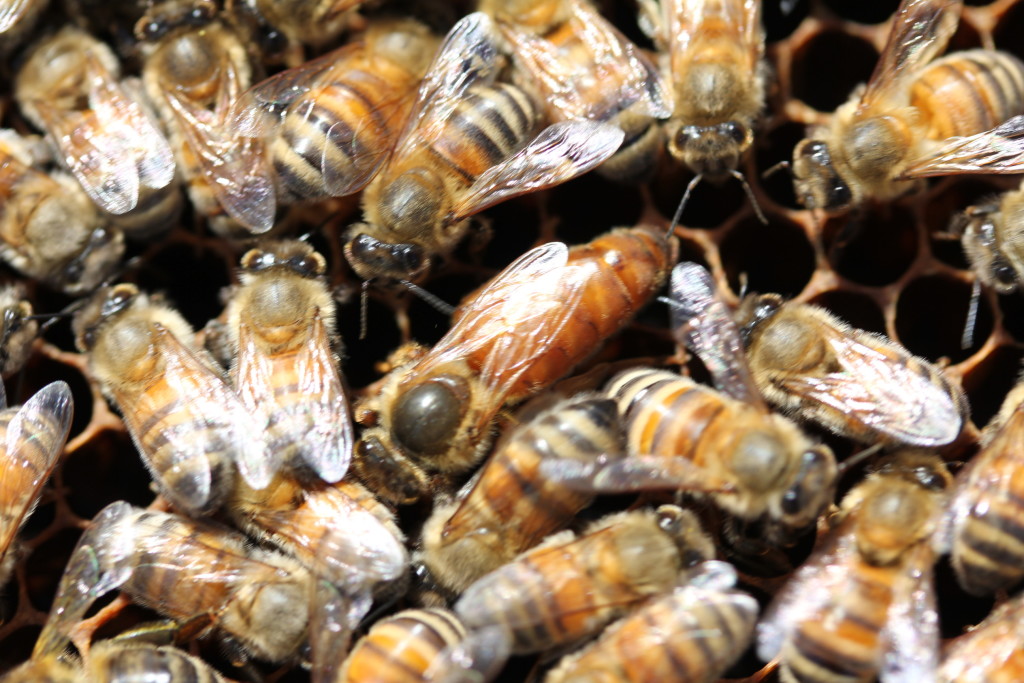 This is the daughter of a package queen I bought last year.  Her mother was Italian but she does not look so Italian anymore.  I have to say I have not been impressed with package queens.  Her mother build up very quickly but tried to swarm her first season.  I moved her to another yard and she never could build up again.  She got replaced.  Her daughter is my weakest hive coming out of winter.  It is really a miracle that they survived.  I went in at the end of March and was about to combine them and I found a dollar sized patch of capped brood and one egg.  That one egg saved this queen’s life.  I have given the hive a few frames of capped brood.  We will see how she builds up. 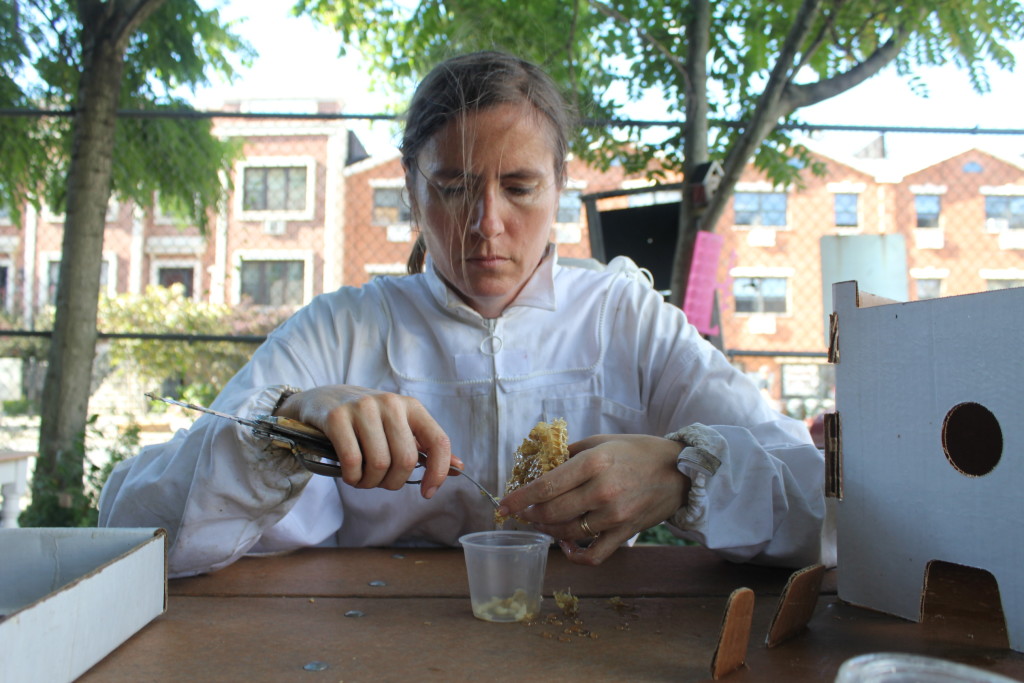 Today I meet the varroa mite on every front.  I did a sugar roll on both of my hives.  What a mess the first time!  Second time was not as bad.  My hive that averaged 10 mites per day on the drop count had three varroa on the roll test.  Randy Oliver recommends that I am approaching treatment level:

“Unchecked, the mite population will double roughly every month during broodrearing. Understand the concept of doubling. If the mite population doubles from 200 to 400 in May, the colony will barely notice; doubling from 400 to 800 in June will start to stress the bees. The July mite population doubles again from 800 to 1600, and now the bees are definitely stressed, honey production is hurt, and viruses start to spread. What you’re most concerned with, is any further doubling once the total mite population passes the 1000 mark (a daily sticky count of around 25, or 4-5 mites in a 300-bee jar sample). Once they pass this level, they appear to explode. If you reach this level in mid August, just before the mite population peaks, no problem. But if you reach it in early July, you’d better pull your honey supers and knock ‘em back!
Come mid August, get mite levels down so that the colony can rear healthy “winter” bees. Then sample again in fall to see if mite reinfestation has taken place. Once the colonies have gone broodless, you can greatly reduce the population of overwintering phoretic mites with powdered sugar dusting or oxalic acid dribble (where it’s legal).”

I did not do a drone harvest on this hive because they filled their drone frame with honey.

The Brooklyn Queen hive did not have any mites on the sugar roll.  I was able to pull a drone frame on this hive.  I sampled roughly 100 drones.  I found 9 mights.  I might have counted a mite twice because I was not removing them as I counted them.  Pretty interesting to find the mite on the brood, the little shits were walking and round very much alive.  It was disturbing to see the mites and and it might indicate things to come.  This hive has been my very clean hive all year and it averages three mites a day on a drop.  The only web reference I found regarding levels was this: 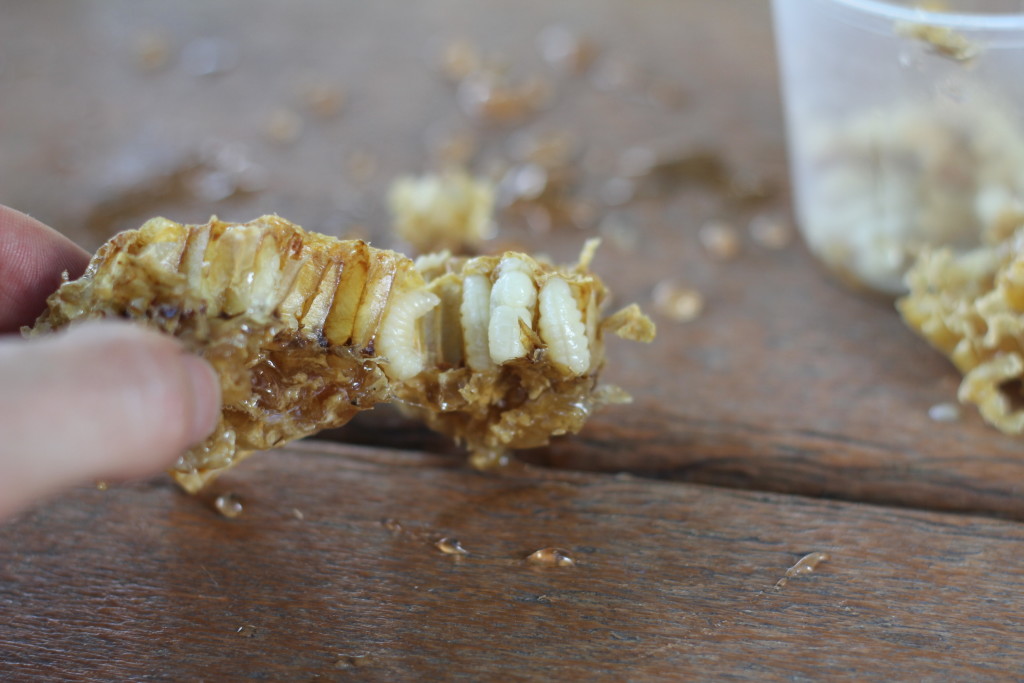 So I will treat the Carniolan hive after three days so they can settle back down after my inspection.  I will probably treat them with one MAQ strip.  I will pull the honey while I treat.  I will wait till I pull the super from BQ hive and test again.

I took this photo of the Brooklyn queen hive today.  I thought that the pattern was beautiful and so nice how the bees are working on the edge.  Are they hovering over the eggs?  After the filling or removing nectar? 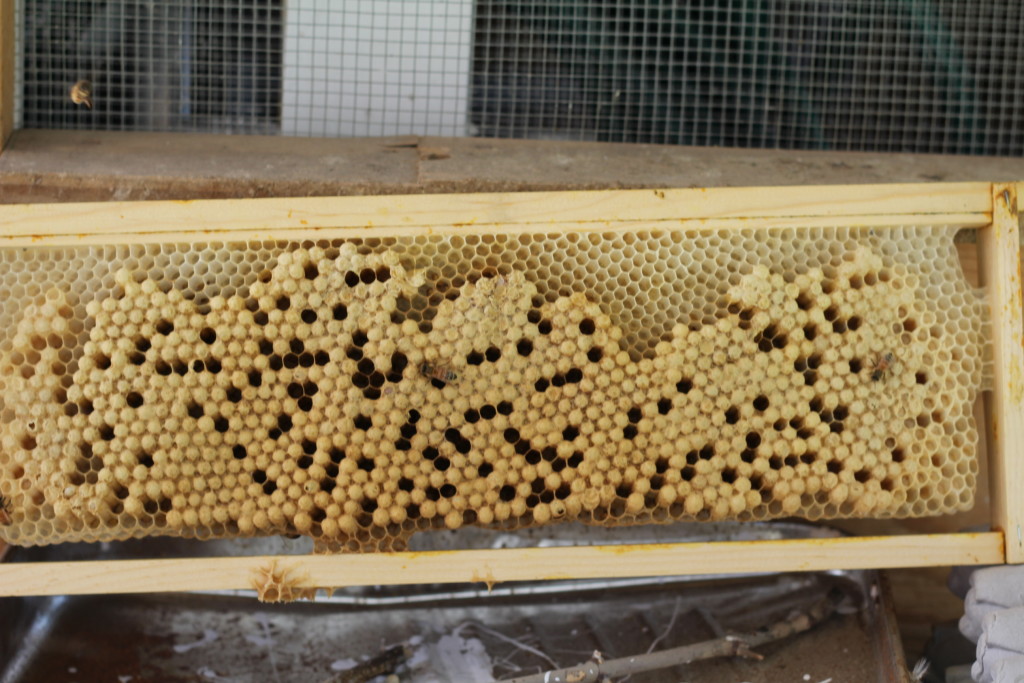 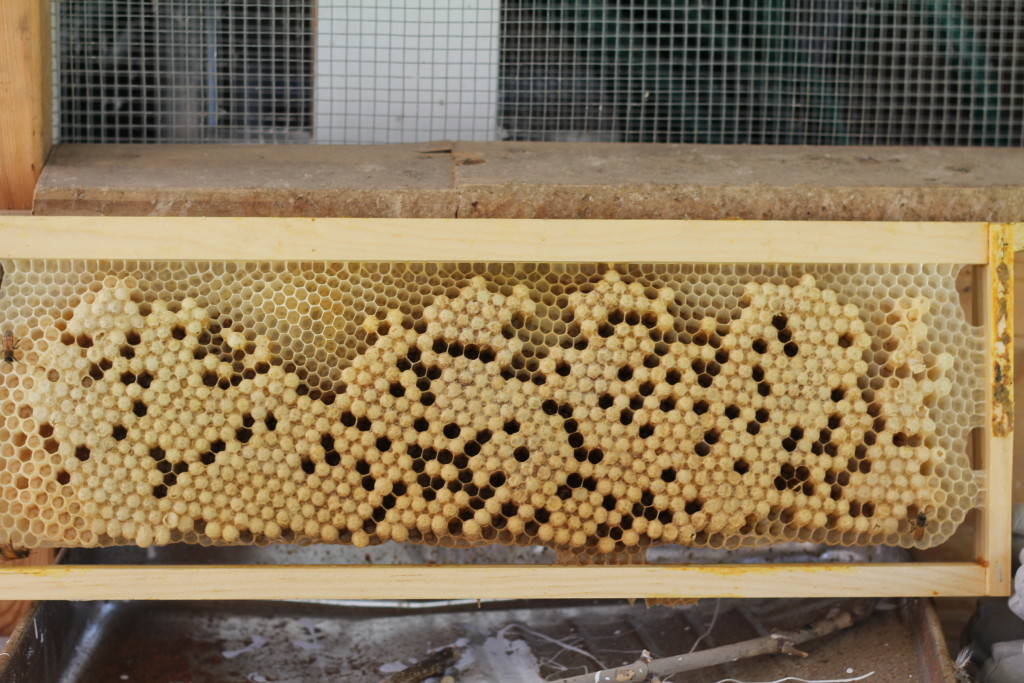