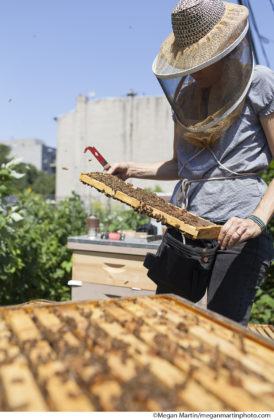 The honey is harvested, the flow is weaning, time to start thinking about winter.  The harsh reality of beekeeping is that the season is short.  The bees now are raising the bees that will take the hive into winter.  These bees need to be as disease free as possible which means addressing the mite population in the hive.  As I complete my fifth year, my hives are getting older.  I am removing the old comb and letting the bees draw out fresh frames of clean white wax.  I am also dealing with a well established mite population.

This year I am taking steps necessary to become as treatment minimal as possible.  The first step is investing in better queens.  Last year I graphed for the first time and I realized that it is not responsible to breed bees that have less the stellar traits.  Top on my list of qualities to look for are bees that can survive with out treatments.  No beekeeper wants to treat their hive with chemicals.  It is wrong on so many levels but so is letting your hive collapse year after year from mites.  Not only do you have the personal heart break of a dead hive, you also are spreading your mite problem to neighboring hives.  So what is the responsible thing to do?  Learn about mites, try all the methods and use data and observation to determine what works for you.

I have used oxalic acid, dribbled on the hive in the fall to kill the mites that are remaining on the bees going into winter.  Oxalic acid is considered organic, but like formic acid, when you see the bees react to the the chemical applications it’s clear that they are powerful and harmful.  After loosing queens to formic acid I am steering clear.  If I want to remain organic my other choice is Oxalic.  Oxalic vapor works best when there is not open brood in the hive.  To achieve this I had to search for, and cage the queens in my hives.  This is truly like hunting.  Going frame by frame you patiently wait watching for the queen to appear. 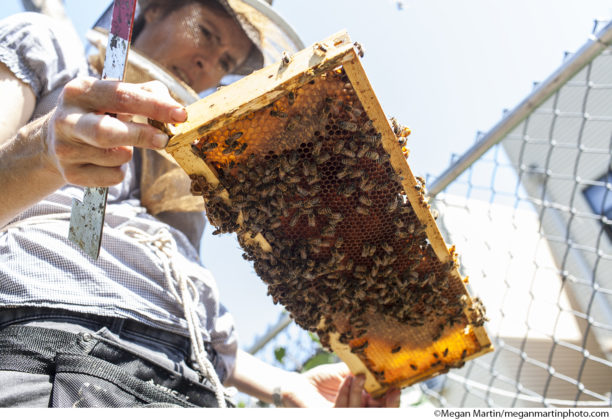 When she finally appears you have to act fast.  Grabbing her by both wings, your other hand holds the cage.  Pinching the entrance you have to place her upper body between your two fingers and nudge her butt once she in position.  I never get her in the first time.  One queen was on to me and hid for a while in a crack on the side of the frame.  It is truly like hunting. 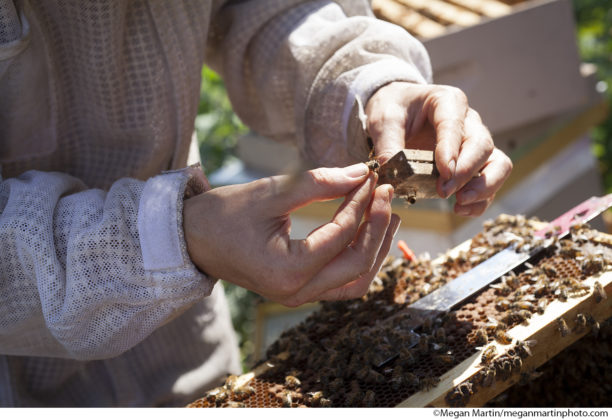 As per the directions on the Scientific Beekeeping site (Randy Oliver).  I will leave the bees in the cage for a little over two weeks.  The drones take 24 days to emerge.  I remove the old queens and put my new VP hygienic queens in the hives counting back from that date.  The new queens can be laying for no more then five days on day 24.  On this day all the old brood has hatched out and the new eggs are still too young for the mites to enter the cells.  This is the day that I treat with the oxalic vapor.  Take a look at Randy’s site to see his data on the effectiveness of this method.  THIS METHOD DID NOT WORK.  READ ON BEFORE YOU TRY THIS WITH YOUR BEES.  Thank you Megan Martin for the amazing photos.  See more of her work at http://meganmartinphoto.com 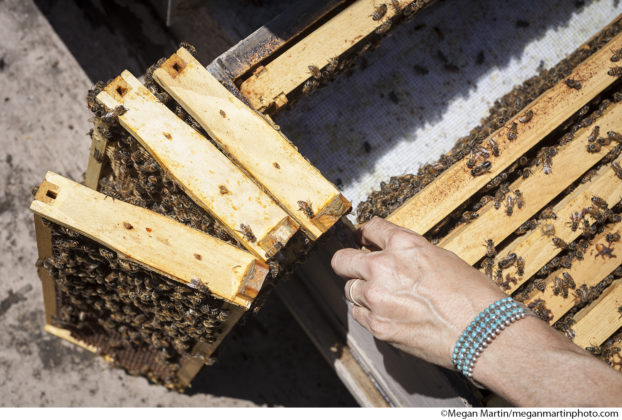 Today I took the oxalic rig out for a test drive.  It’s day 17 and most of the brood has hatched out.  The queens are coming in 4 days so I decided to start removing queens to make nucs.  I went into my hives at the Brownsville location.  The first hive I had already inspected so I knew what to expect.  I pulled the queen and the super and treated the hive.  There is a lot of contradictory information out there about oxalic acid vapor and I do not want to contribute to it.  I advise to research your respirator carefully.  I used acid gas cartridges on a low cost 3-m respirator.  Don’t mess around with your lungs. I was happy to see how far I could get from the hive when I was treating.  I used a battery designed for charging cars, It worked great.  I felt safe, and uncomfortable and hot, but who’s complaining, the bees had it worse.

The surprises came with the second two hives.  In the next hive the queen was dead. This was the first queen I caged and I was clumsy and probably handled her too roughly.  The bees made a replacement, a virgin, that I have to find before I requeen, bummer.  I treated them and moved on to the next hive.  I found the queen in the cage as well as lots of brood of all stages of development.  So much for a brood break.  I had caged one queen, a mother or a daughter, and the second queen carried on as usual.  I put the caged queen in the nuc and treated.  What I should have done was release her so they could carry on with two queens.

What I learned from this experience it that caging queens does not work.  The bees will make a replacement right away.  I learned that they are pretty sensitive when it comes to this.  ALL THE HIVES IN WHICH I CAGED THE QUEEN REQUEENED THEMSELVES.  I wasted a lot of money on new queens that the bees did not accept because they had made their own.  They seem to know right away when their queen has been confined or separated and they start the process.  Once again real experience does not mirror what you read in books.