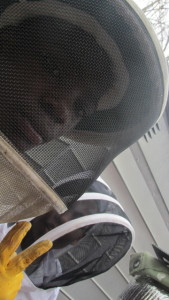 We have had a very early spring here in NYC.  After a mild winter all my hives survived.  I lost the nucs that I started in August.  One was pretty empty and the other was queenless so I combined them.  I have three hives that are already busting at the seams and three hives with extremely small clusters.  I gave some capped brood to the weak hives and I am hoping they start to build up faster. 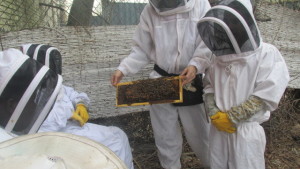 I have a strong group of boys that have been learning about bees all winter.  This was our first visit to the hive and excitement was running high.  The boys react extremely differently to the bees.  One boy is deathly afraid.  He was able to sit and watch the entire inspection and seems to feel better about being up close with the bees.  Another boy was pulling frames by himself and showing a lot of care and focus with the bees.  I think in a few visits he will be able to lead a hive inspection with my direction from the side. 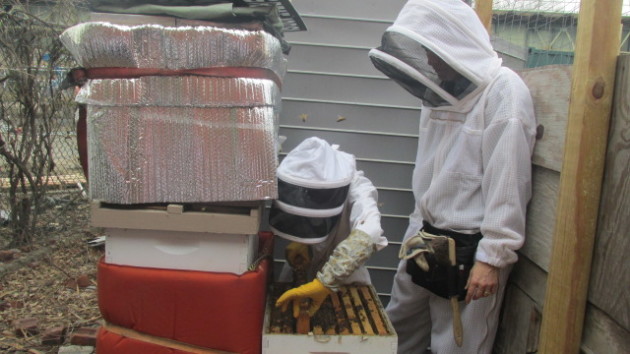 My big hives seem determined to build up and swarm.  They are all second year queens.  I am considering extracting some of the winter honey with the boys so I have plenty of drawn comb to open the brood nest when the time comes.  I am also hoping, if I play my cards right, I will get some swarm queens to use as replacements.

I woke up the morning of Honey Fest happy to see the sun.  We were rained out last year and this year threatened the same.  I have been working with my scholars all year to prepare for the day.  Last fall I started and over wintered two nucs that grew into full sized hives at the Life Lab, our school garden.  Last winter we created a business plan, a logo, and budget.  Four apprentices learned to care for the hive.  While one boy would become passionate about the bees, another would get into the business side.  Some boys would lose interest and other boys would join.  I took on two boys with challenging behavior issues and I saw that they loved the adrenalin rush that goes with opening the hive.  The challenge with these boys was maintaining their interest when we learned about bees in the classroom.  At the end of June at the height of the season, I said good bye to the boys for the summer.  I harvested the honey with my other hives.  A few weeks I rounded up the kids for bottling.  Haphazard at first, the kids settled into a routine as they realized that it was not about what job they wanted to do, rather what job needed to be done.  An assembly line developed.

On the day of honey fest, Denville arrived first.  He looked uncertain about whether it was cool or not to be with his teacher and his mom in this totally unfamiliar environment.  His mood soon changed when he made his first sale. 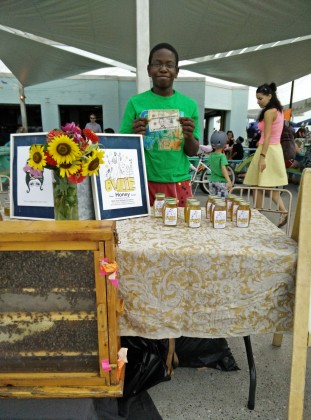 My girls arrived next.  They were bubbly and excited.  They wanted experience everything from the other vendors, to the food, to the beach.  The three scholars fell into a nice rhythm offering samples while Denville’s mom stood in front and explained the project.  By the time Emmanuel arrived we were in full swing with a steady line of people in front of the table.  Emmanuel turned into our expert salesman.  He was smooth and inviting when he offered passers by samples and no one could say refuse.

As I sat back and observed them I saw how excited they were.  Kids from Brownsville grow up with a lot of messaging that their lives will not amount to much.  Many people around them have given up hope.  They don’t trust that good things will come their way if they work hard.  This is why it was so important to me that Their selling day would be successful.

About half way through the day I could see that they were selling a lot of honey.  I was excited.  They were excited.  Emmanuel was dancing.  It was turning into a great day.

The rain did not come until it was time to leave anyway.  One scholar asked if we could stay.  Another wanted us all to go to the beach.  Emmanuel said it was the best day of his life.  We packed up and the kids headed to the train with Denville’s mom.  They did not leave before we counted and divided the money they made.  The kids made over $600 dollars! 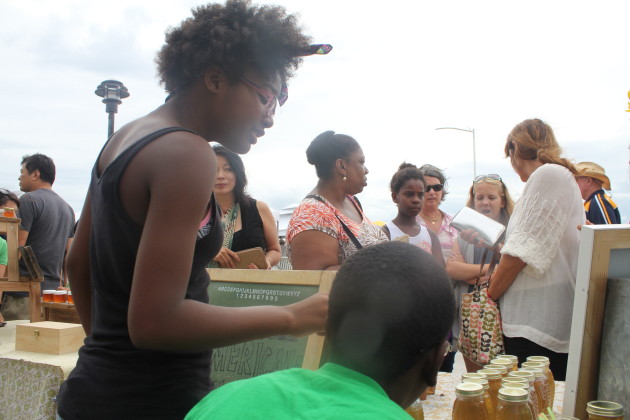 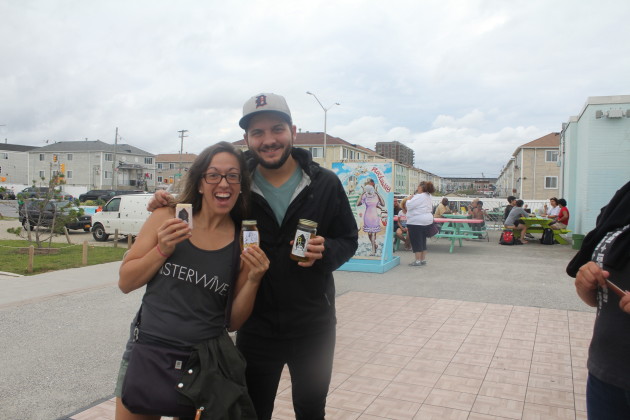 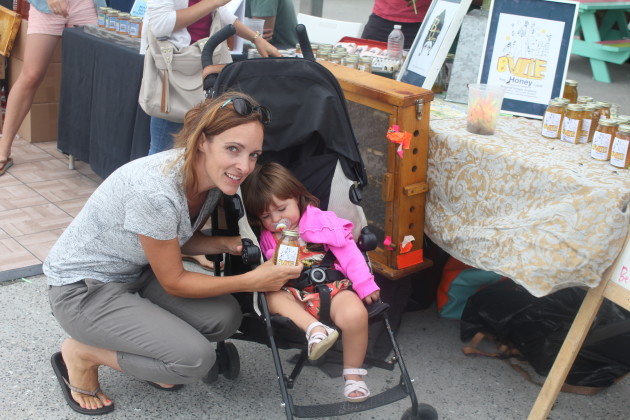 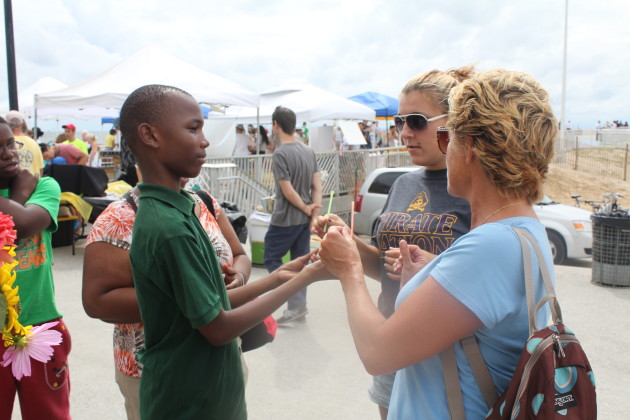 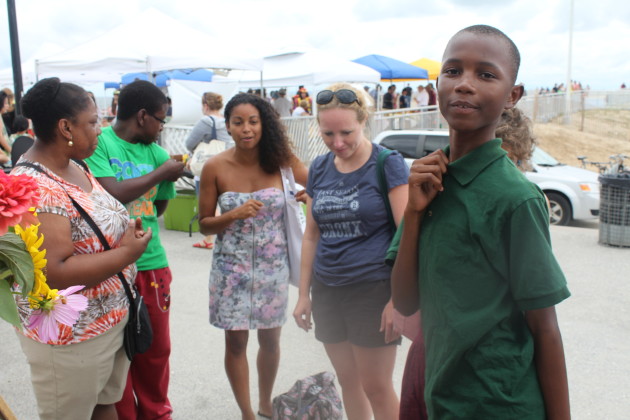 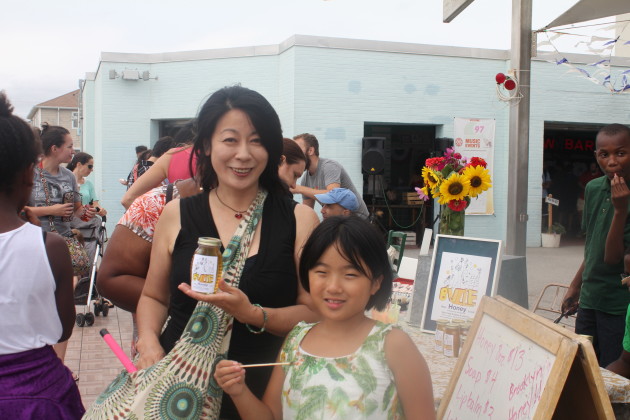 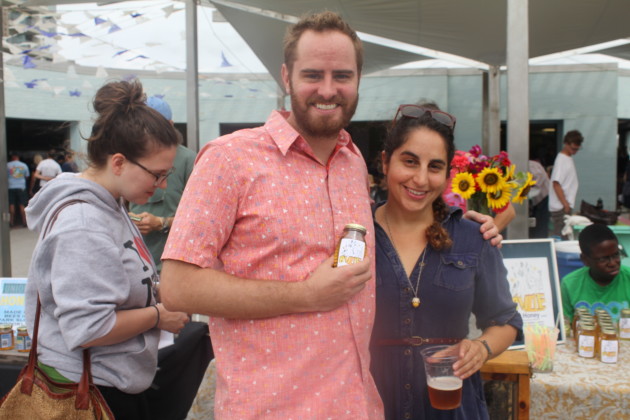 For Honey Fest every year I offer an apiary tour.  This year we suited up and inspected a nuc that I plan to over winter.  We had two young girls who looked like little martians.  From time to time the would tumble over in their space suits but they did not seem to mind.  They were very inquisitive and patient as we talked about the inner workings of the hive.  A couple, aspiring beekeepers also participated.  When I started seeing pictures of myself appearing in my feed I realized that I was already following Rachel on Instagram.  See has a great feed @beethepeople. 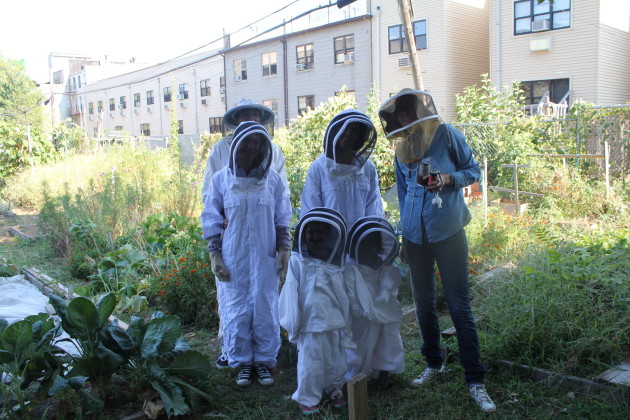 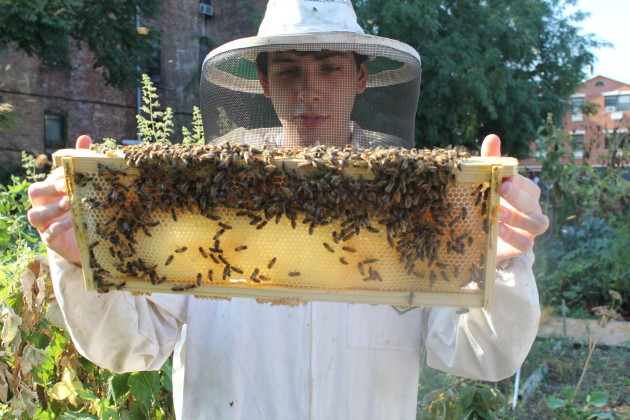 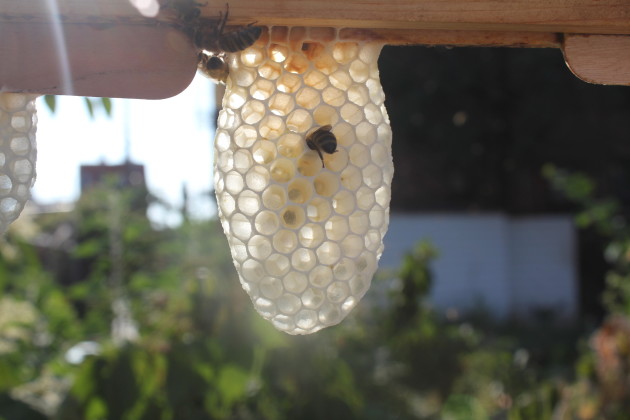 Since beginning beekeeping I have wanted to try grafting.  The idea of creating queens thrilled me.  Last year I had planned to do it but my hives became swarmy and I had so many splits to deal with that there was no point.  This year I planned things out in advance.  I got a lot of help by watching Michael Palmer videos, chatting with people on Beesource, and reading everything I could get my hands on.

I decided to do a ten frame cell starter and queen rite finisher.  I demareed a hive that I was afraid would swarm because it’s three year old queen tried to swarm last year.  Since I had her in the bottom box.  I thought if I put my nice partially drawn black foundation she would lay in it.  Of course she did not touch it.  This forced me to go to plan B which was to find random 3 day old larvae in the rest of the hive.  I do not recommend this because it is time consuming when you want to work quickly.  Also the old brood combs are so deep and dark that its almost impossible to get the larvae. 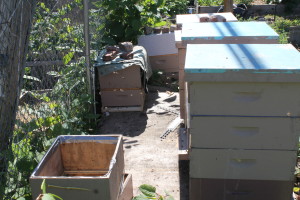 I set up my ten frame box with nurse bees the day before I grafted.  I put in some open brood to get the nurse bees going.  I also put in my grafting frame for them to polish it.

The next morning I pulled the frame and grafted. I was filled with self doubt to say the least. I thought how can any of the larvae possible live. They were so tiny I could not even see them without a magnifier on. They seemed so vulnerable. And what had I done to my hives. I had to rip one apart completely to get the nurse bees I needed. Grafting is really for folks with larger operations. That said I am already making plans for next year.

So in they went and two days later I expected nothing, instead half of the cups took. 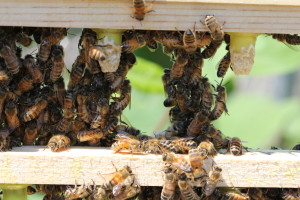 Into the queen rite cell finisher they went. This poor hive already had the queen in the bottom box. I checked the hive for queen cells but not the frames from the cell starter. I had a few days to think about this fact, so I went in a day before the queens would be ready and found queen cells on one of the frames. I put that frame in a nuc a day early. When I pulled the others the next day I noticed that one was empty.  The larvae had died.  This freaked me out a bit but I put them all in nucs anyway. I waited about two weeks the recommended 27 days + or – 5 days to check the nucs.  The cells had comb drawn all over them which I had to cut away.  I think this is because I did not put a frame of foundation in the cell finisher.  This gives the bees some place else to put the wax. 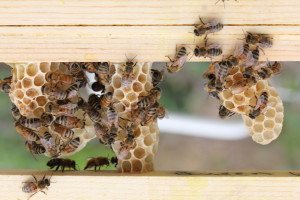 Ideally I would have moved the nucs after adding the cells and I could see that a few of them had become very weak. I saw a lot of activity at two. One of these nucs had two virgins running around in it. The other had a mated queen. Of the six nucs, one mated. The results were disappointing but the experience was great. I just wish I knew if the cause of the failure was because of how I raised the queens of the mating conditions. Things I would do differently:

-Make sure I have the 10 frame boiling with bees, or better yet try a closed nuc style starter instead.  I am doing so few cells the ten frame starter may be over kill.

-Cage the queen on the frame I want her to lay on.

-Make the mating nucs more leak proof by dividing them with wood instead of foam.

-Move the mating nucs to a new location if possible.

I will follow up with a picture of the brood pattern of the new queen.  I am sure it will be lovely.